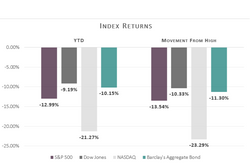 What is happening in the market? May 2022

The conventional thinking is that stocks are risky, but offer greater long-term returns, while bonds are a safe place to put your money. For this reason, investment pundits often recommend that retirees hold a more conservative portfolio designed to generate income. An example would be 60% stocks and 40% bonds. This would commonly be referred to as a ‘balanced’ portfolio.

Taking a look at recent market returns, however, we see that there has been no safe haven in which to place your money.

As seen in the market recently, it is likely that whether you have your money invested in stocks or bonds, it has declined in value. One might speculate that it would have been safer to keep your money in the form of cash at the bank, and that’s partially true. However, with inflation streaming hot at 8.5% per year, even cash in the bank is losing value, in the form of lost purchasing power, at an astounding rate.

So, what’s going on? Where is the money going?

The answer is that it’s disappearing.

The Federal Reserve, in an effort to curb inflation–which can be thought of as an oversupply of money–is taking money out of the economy through implementing monetary policy, which helps to explain why all of these asset classes are losing value simultaneously.

The Federal Reserve is accomplishing this in two ways:

The first is by raising interest rates, which has already begun (5/4/2022 - Federal Reserve raised the target for its benchmark federal funds rate to 0.75%-1.0% from 0.25%-0.5% to control inflation). This is causing banks to lend less and borrowers to steer clear due to unattractive rates available in the market. This is leading to consumers and institutions having low purchasing power. And if they are purchasing less, the prices of commodities are decreasing. It is simple demand and supply; less demand means more supply and thus, lower prices– which is the first thing the Federal Reserve is doing to extinguish the inflation fire currently raging.

The second change the Federal Reserve plans to make is something known as 'quantitative tightening’.

Do you know how people often talk about printing more money? This is literally the opposite of that, and can be thought of as burning money (hypothetically, of course). Fundamentally, this is decreasing the supply of money. Less money means less buying, and less buying should lead to lower inflation.

There is a danger to all of these maneuvers by the Federal Reserve. A recession. Less buying means less selling, and less selling means less revenue, and less revenue leads to companies needing to cut costs. Finally, cutting costs means laying off your least productive or least tenured workers. If you’re paying attention, that process has already started with Rocket announcing that they’re laying off 2000 employees, since mortgage demand is down, and Amazon laying off truck delivery personnel.

Expect this to continue.

The terrible news is that jobs will be lost. The silver lining is that the money earned will be more valuable, and the economy will become healthier in the long run. This should lead to recovery in the stock market and will reflect the underlying health of the companies within it.

Six things to watch as we move through the second quarter:

(1) The most important will be the pace of the Federal Reserve’s actions. Quicker and higher interest rates will likely cause big market pullbacks, for a while.

(2) War and escalating conflict cause market volatility. However, it’s important to pay attention to the long-run effects. As far as the American economy is concerned, our companies are healthier, our alliances are stronger, and American ‘soft power’ (a measure of non-military influence in the world) is again ranked number one in the world – a place it hasn’t been for nearly 20 years. Absent of nuclear conflict, most of the economic aftermath of Russia-Ukraine war will end with the United States gaining ground on other economic blocks throughout the world.

(3) On one hand COVID lockdowns throughout China are disadvantageous for us since China produces many products we need. Therefore, the inability of companies to produce certain products, that rely on imports from China, causes a decrease in the supply of goods, which drives up prices and causes inflation. On the other hand, people quarantined in their homes don’t consume much (think of driving and the demand for gasoline), and if they aren’t buying they’re helping to drive down prices. Long-term, China not serving as a reliable supply chain partner for companies around the world, should make companies diversify their supply chains and become less dependent on China going forward.

(4) Commodities prices could go anywhere. We are going to see demand for travel in the United States in the summer, and certainly demand for heat in Europe over the winter. I don’t think anyone has a clue where energy prices could go by the end of the year. So, expect volatility throughout the year for almost all commodities. Uncertainty leads to risk, and riskier assets are worth less, so uncertainty will be a drag on the stock market.

(5) The election. Remember that we’re in an election year. Elections cause uncertainty and that depresses markets. However, once elections are done we have certainty (certainty being knowing who won), and certainty means less risk, and less risk means a healthier stock market. We’re expecting the market to end the year strong, even if a recession is looming at that point.

(6) The economy is already slowing down, so expect the usual suspects when it comes to recession – a less liquid housing market and lost jobs. For perspective, U.S. Q1 2022 GDP falls 1.4% as economy shrinks for the first time since the pandemic. However, remember that the stock market is forward-looking. So, if we have a recession, be on the lookout for someone making the comment, “Why is the stock market at all-time highs while we’re in a recession?” If that occurs, it’s because the stock market is reacting NOW to a recession (or slowdown) in the future. Think of the stock market as a movie trailer. By the time you go to the theater to see the actual movie, the trailers will have changed and there will be new advertisements for future movies. By the time we get a recession (or slowdown), the market will already be trying to get a jump on the recovery, which often comes quickly.

Buy low and sell high. It’s easy to say, but difficult to do. In order to buy low you have to be willing to invest money when things look awful. We’re not in love with the concept of market timing, but if you want to try and time the market, listen to your common sense – you need to buy when everyone is scared. And if everyone is scared, that probably means you are as well. So, what’s the point? You should be buying when you’re scared, and selling when you’re not. I may not go so far as to tell you to buy when you’re scared, but I would say that being scared is nothing to be afraid of – it can often signal a positive entry point in the market. Think of yourself as shrewd and opportunistic. Once the stocks rally, everyone will be feeling good, but you will have missed the train.

In summary, most market participants and professional investors are looking for opportunities to buy right now amid the market turmoil. It’s probably not a good idea to sell. We want to hold what we have and put new money to work while prices are depressed. Doing so can lead to higher yields of return once the market becomes healthier.

All investing involves risk including loss of principal. No strategy assures success or protects against loss.

Content in this material is for general information only and not intended to provide specific advice or recommendations for any individual. All performance referenced is historical and is no guarantee of future results. All indices are unmanaged and may not be invested into directly.